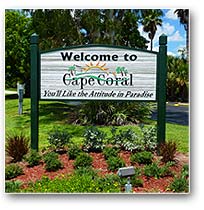 A few years back the city of Cape Coral was the fastest growing city in Southwest Florida and altogether one of the fastest growing cities in the United States. Investors compared Cape Coral to the old Klondike and the gold rush a little more than one hundred years earlier. However, building new homes requires resources and material. After Florida had been hit by several hurricanes and materials were used to fix the damage across the state; concrete and drywall material became scare, especially in the years 2005 and 2006.

Many builders were desperately looking for a way out and used drywall imported from abroad, mostly China. Some builders used this material even as early as 2001, some used it in repairs only which means that the walls may only be partially tainted.

Chinese drywall, also called defective or toxic drywall, is suspected to cause health problems, but may also cause damage on electrical wiring, corrosion on pipes, and even air conditioner coils. The drywall components emit sulfurous gas, producing unpleasant odor and can get into cement blocks, tarnish metal, and is considered a dangerous product.

The gas emitted may cause allergies, respiratory issues, may affect eyes, liver, kidneys, skin, and cause damage to the nervous system. It is recommended to have the home inspected for Chinese drywall , especially if the home was built between 2003 and 2007 but even older homes may have been re-done at one point and there is a possibility that defective drywall has been used.

Signs and symptoms may include mirrors or air conditioning coils that turn black, metals or even jewelry getting tarnished or family members experiencing nose bleeds or allergic reactions since moving in the home.

It is difficult to find a satisfactory solution to the problem, since neither the builder nor the home owner had been aware of those consequences when foreign drywall has first been used. Many problems in regards to payments and reimbursements have developed and remedies are hard to find. Some builder specialize in stripping the home of all drywall and basically rebuild the interior, however, long term results are not yet available and only time will tell how successful those resolutions are in the end.

The best advice to prospective home owner is: consider wisely and have the home you are interested in inspected. If it is positive for defective drywall it may be better to walk away even if the price is tempting. A good real estate agent will answer your questions and assist you in the decision making process.